Fritz and Purvis' test in R

Here we will look for phylogenetic signal in primate activity period (diurnal vs. nocturnal) using D (Fritz and Purvis 2010) in caper. Due to the publication date of this paper and delays in publishing the book, this method does not appear in the Comparative Approach in Evolutionary Anthropology and Biology, but is worth knowing.

Next download the data and tree, and load them into R after navigating to the folder with the downloaded files: 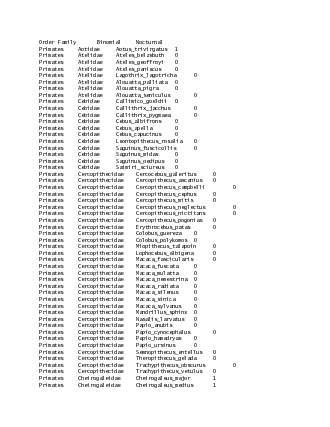 caper requires your phylogeny and your data to be in a special kind of R object called a comparative data object. This will match the species names in the tree to those in your data automatically so there is no need to worry about data being ordered correctly etc. phy is your tree, data your data set, and names.col is the name of the column containing your species names.

NOTE: vcv = TRUE stores a variance covariance matrix of your tree. na.omit = FALSE stops the function from removing species without data for certain variables. warn.dropped = TRUE will show you any species which are not in the tree and the dataset and are therefore dropped from the data object. Make sure you check this list is what you expected, it may reveal typos in your species names. If you want to turn this off use warn.dropped = FALSE. This function does all the matching of data and tree for you.

To estimate D we use the function 'phylo.d':

To view the output type "result" and press enter. The output should look something like this, subject to slight differences due to stochastic factors associated with the simulation process:

Fritz, S. A., and A. Purvis. 2010. Selectivity in Mammalian Extinction Risk and Threat Types: a New Measure of Phylogenetic Signal Strength in Binary Traits. Conservation Biology 24:1042-1051.